Disclaimer: This is a translation of the summary, published by DW Bulgaria and written by Ivan Bedrov. I am not a translator and probably big parts of this text could have a better translation. However, as I don’t find any, I just wanted to have this well-done summary in English too, so more foreigners could see why the Bulgarians are protesting.

Almost every day since the assignment of “Oresharski” Government looks like the day when Peevski (on the picture below) was appointed as Head of the State Agency of National Security. Nearly a month has passed, and the government members cross all lines and start new scandals. 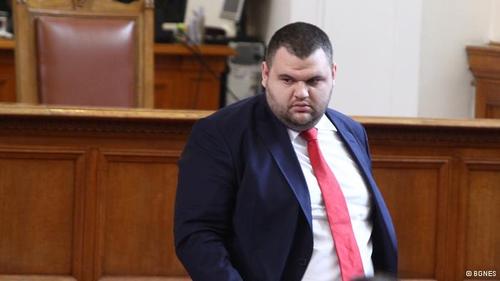 It has been a month since the protests in Bulgaria have started and probably more time will pass before they end. Meanwhile stressing on their demands and creativity, we seem to miss what is the Government doing. When they crossed the line with appointing Delyan Peevski as Head of the State Agency of National Security (14. June 2013), they tried to undo it and palliate the situation. It seems that that day when they assigned the “recently experienced catharsis” media boss, was also the start of already a-month-long-series of bad decisions. The situation was constantly messed up by the alliance of Bulgarian political parties BSP-DPS-“Ataka” (Bulgarian Socialists Party, The Movement for Rights and Freedoms and the party called “Attack”).

While people are out every day and protest, other people simply fulfill their commitments to parties, bosses, groups and suspicious circles. During the past month they made so many scandalous assignments that every single one of them could be a reason to a separate protest. For example, the new Head of the Regional Administration of Sofia Region is Emil Ivanov (The Movement for Rights and Freedoms), notoriously famous with controversial swaps and sales of estates during his last mandate between 2005 and 2009. He was also found guilty in bodily injury charges.

Mihail Mihaylov (Bulgarian Socialists Party) is now Head of Regional Administration of Pernik Region. After being a Construction Deputy-Mayor he was fired by the Mayor Rositsa Yanakieva last year due to doubt in defalcation. He was misapplying subventions after the destroying earthquake in Pernik in May 2012.

You can do the math and can imagine where parts of the subvention went.

There has been another scandalous case: just for couple of hours a Deputy-Minister of Interior Affairs happened to be a former member of the notorious and outrageous corrupted gang SIK. And another one: Bulgarian council in Frankfurt was forced to declare he wasn’t assigned as Deputy-Minister of the Ministry of Justice.

Daniel Papazov, The Minister of Transportation created international scandal by stating that the European Commissioner Johannes Hahn personally approved Petar Kirov as Deputy at the Ministry of Transportation. Of course, he was forced to formally apologize after the official disclaimer by Brussels.

Another highly controversial public figure – Volen Siderov, was assigned as Chairman of the Anti-Corruption Commission. (That act happened while he was fighting against the protesters on his own in late night hours and forced the policemen to keep him away from the crowd)

But that’s not all of it

Georgi Hristozov was announced to be the new chairman of the Bulgarian Energy Holding. Then the Prosecutor’s Office of the Republic of Bulgaria reminded that he was sued for fraud and defalcation; which makes it impossible for him to receive access to classified information. This assignment took place while the “Natsionalna Elektricheska Kompania” (don’t ask about the name, it is probably something with the Bulgarian Trade Register’s regulations in Latin… it means “National Electricity Company”) was struggling to get a loan to survive, while assignments like this one significantly increased the risk.

But that’s not all of it: the Government banned the international betting websites if they are not registered in Bulgaria (which happened to be impossible at the time!). That looks like a perfect opportunity to the gambling bosses in Bulgaria.

At the same time, the Government took another controversial decision: they used 27 000 000 BGN to temporary solve the problem in “Vazovski Mashinostroitelni Zavodi” (shortly VMZ, the biggest enterprise of the military and industrial complex in Bulgaria). The employees have not received their salaries and the company has too many loans and obligations to fulfill all of theirorders and to continue work normally. Using this money, which was taken from the taxpayers, was only temporary and assumed very inappropriate decision.

At the same time, the Government indicated that would take another loan (1 000 000 000 BGN). No one really knows why and what for…

People are on the streets now to protest against the Government and all of those ridiculous acts. Meanwhile the Government members continuously show only contempt to the protestors.

Members of the ruling party coalition have called these people: “Internet lumpens” (in Bulgarian “лумпен” means something similar to bum, ragamuffin), who protest against anything (and clearly states that being online and using Internet is something wrong and addictive); “toothless drunkards”; “wealthier people whose taxes we want to raise”; “paid”; and Volen Siderov (Chairman of political party “Attack”) even suggested the protests to be criminalized.

Every day buses with “contra protestors” come to support the Government, and Prime Minister Oresharski “negotiates” with them.

What is even more absurd is that every day the Ministry of Interior publishes that protestors are between 2500-3000 people, when the pictures and our eyes clearly show that they are more than 20 000-30 000. The Government was also very frustrated from the fact that French and German ambassadors in Bulgaria discussed the obvious situation critically. Are we 2013 or what?

This has been our every day life in Bulgaria for a month. When you think of all Government’s activity throughout that time, you can only think of absolute political insufficiency and blind execution of controversial assignments.

This is a typical example of the way citizens’ interests are completely ignored by the Government’s daily routine. Now it is extremely important to stay focused on every single act of the Government, which proves their hidden agenda. The Government now realises that while people are protesting, they can simply ignore them and do their things as long as possible.

Translated and some explanations added: A. Nikolova

View all posts by alnik